Because you are born on the date of November 10th, it means you are born to play the 10 of Clubs with a 3 of Hearts personality.

The 3 of Hearts is the secondary pattern of your life. It reflects your outward personality and may rule your behavior. 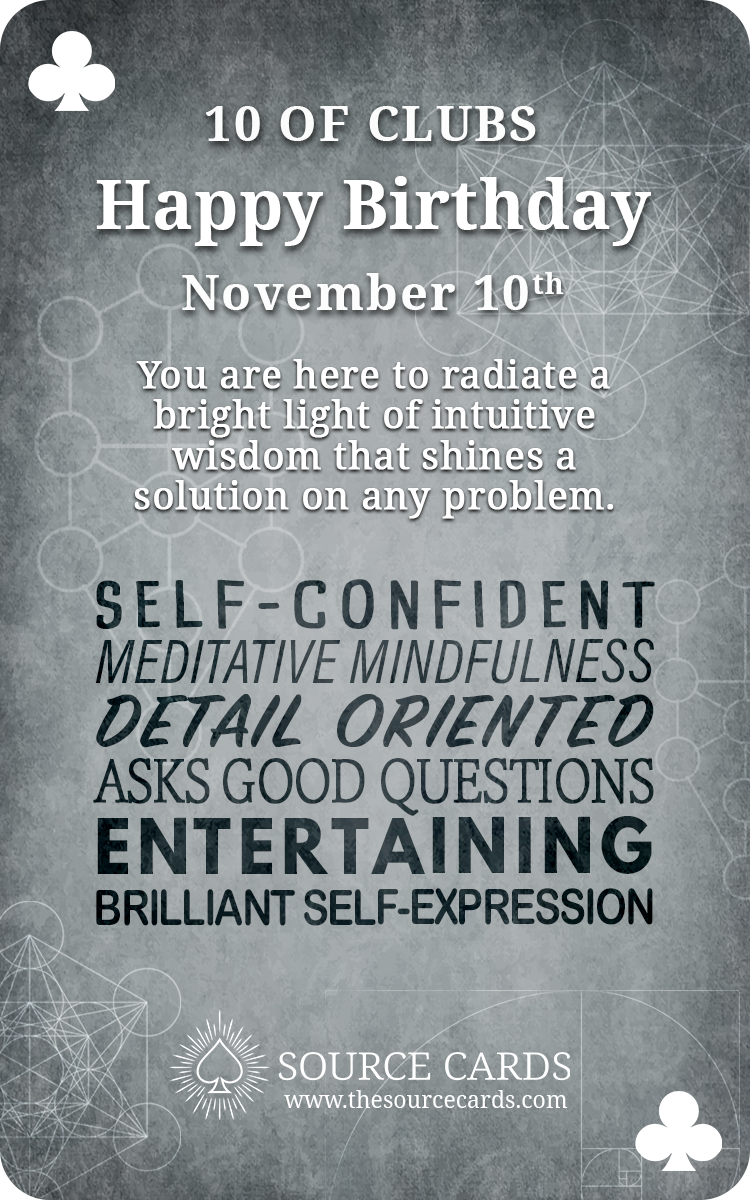 All of these people share your cards to play. Like you, they were born to play the 10 of Clubs overlaid with a 3 of Hearts personality.

German monk and theologian whose protest against the abuses of the Roman Catholic Church sparked the Protestant Reformation; in the face of enormous pressure, he refused to retract his writings; he was excommunicated by the Pope and condemned as an outlaw by the Holy Roman Emperor; his theology challenged church authority and framed salvation as something that could not be earned, but could only be conferred as a gift of grace; his translation of the Bible into the German vernacular and his marriage set important precedents of making the Bible available to the lay reader and making marriage part of clerical life; he was, however, virulent in his anti-semitism, calling for Jewish synagogues to be burned; later, in the 1930s in Nazi Germany, Protestant Churches used his words as justification for participating in the persecution of Jews

Born and raised in Germany, he was the last British monarch born outside of the United Kingdom from 1727-1760; he spent most of his time as King of England living in Germany where he was known for his many mistresses, short temper, and boorish behavior

Russian general, military engineer, poet, and small arms designer who invented the famous AK-47 assault rifle, and its later variants, the AKM and the AK-74; its low production costs, performance under harsh conditions and widespread availability have made it one of the most prolific weapons in history; he was, according to his own words, a self-taught tinkerer with innate mechanical skills; his was a classic rags-to-riches tale: he was born to a Russian peasant family as one of 19 children; after his family was forcibly removed from their land and sent to Siberia, he left school after the equivalent of 7th grade, became a factory worker, and was then conscripted into the army; his talent was recognized early on and by the age of twenty-three, he was already designing the first prototype for the AK-47

Shakespearian actor who in the 1960s became one of Hollywood's top box office stars and one of the highest paid actors in the world; known for his resonant baritone voice, his heavy drinking, and, thanks to his two marriages to Elizabeth Taylor, for being the hot topic of celebrity gossip

Italian composer, who with more than 400 film scores and 100 classical works to his credit, is one of the most prolific and successful film composers of all time

English author of short fiction, novels, comic books, graphic novels, nonfiction, audio theatre, and films; his works include the comic book series The Sandman and the novel The Graveyard Book

As the star of the hit TV series "Grey's Anatomy," she is one of the highest paid actresses on television; she has also directed several episodes and has become a co-executive producer of the show

Known professionally as Diplo, he is an American DJ and music producer who is involved in a variety of musical projects; he is known for his tumultuous personal relationships

American country music singer and songwriter; she is known to have multiple symbolic tattoos

Click here to live the life that will fulfill your destiny.