Because you are born on the date of July 24th, it means you are born to play the 4 of Clubs with a Jack of Spades personality.

The 4 of Clubs is the primary pattern of your life. It is like your Avatar. It's your entrance token to the game of your life.

The 4 of Clubs is also the secondary pattern of your life. It reflects your outward personality and may rule your behavior. 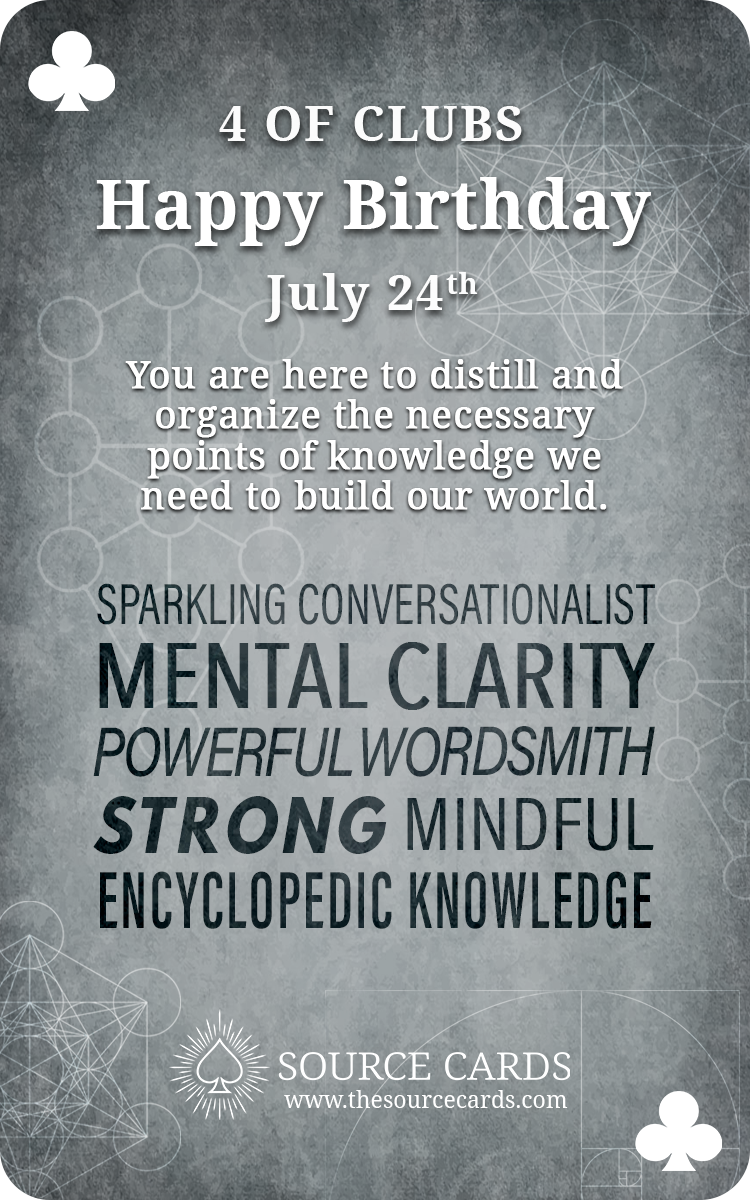 All of these people share your cards to play. Like you, they were born to play the 4 of Clubs overlaid with a 4 of Clubs personality.

Also known simply as El Libertador - he is a cultural icon of Latin America; he was a Venezuelan-born military and political leader who led the region that is now made up of Venezuela, Colombia, Ecuador, Peru, Panama, and Bolivia (named after him) to independence from the Spanish Empire; born into a wealthy family, he was sent to Spain at age 16 for his education where he encountered the ideas of the European Enlightenment; returning to his native land, he decided to overthrow the colonial power and began a movement for independence; as a military general and during his military campaigns, he rode on horseback 70,000 kilometers, which is 10 times more than Hannibal, three times more than Napoleon, and twice as much as Alexander the Great; at the peak of his power, he ruled over a vast territory in South America, but he could not hold it and was removed from power and nearly assassinated; while awaiting his deportation to Europe, he died of tuberculosis at age 47

French author whose novels The Count of Monte Cristo and The Three Musketeers have become internationally famous, adapted to countless films; he was married four times and may have had as many as forty mistresses

Leader of the New York City gang Bowery Boys and the Know Nothing political party; after a long-standing feud, he was shot and killed by a rival gang leader; he was the inspiration for the character of "Bill the Butcher" portrayed by Daniel Day-Lewis in Martin Scorsese's film "Gangs of New York"

President of Paraguay from 1862 and 1870; a controversial figure in South America, particularly for his role in the Paraguayan War, which ended with the total defeat of his country and his own death in battle at the hands of the Brazilian army; others maintain he was a fierce defender of Latin American interests

First woman to fly solo across the Atlantic Ocean; during an attempt to make a circumnavigational flight of the globe in 1937, she disappeared over the Pacific Ocean

Baseball slugger who owns the record for single-season home runs and career home runs, which would possibly make him the greatest player ever to play the game... except, he was found to be using steroids to enhance his performance, which has put an asterisk on his accomplishments

A cultural icon known simply as J. Lo, her personal life has often been the stuff of media tabloids; she is considered the most influential Latin entertainer in the United States