Because you are born on the date of December 15th, it means you are born to play the 3 of Clubs with a 5 of Diamonds personality.

The 3 of Clubs is the primary pattern of your life. It is like your Avatar. It's your entrance token to the game of your life.

The 5 of Diamonds is the secondary pattern of your life. It reflects your outward personality and may rule your behavior. 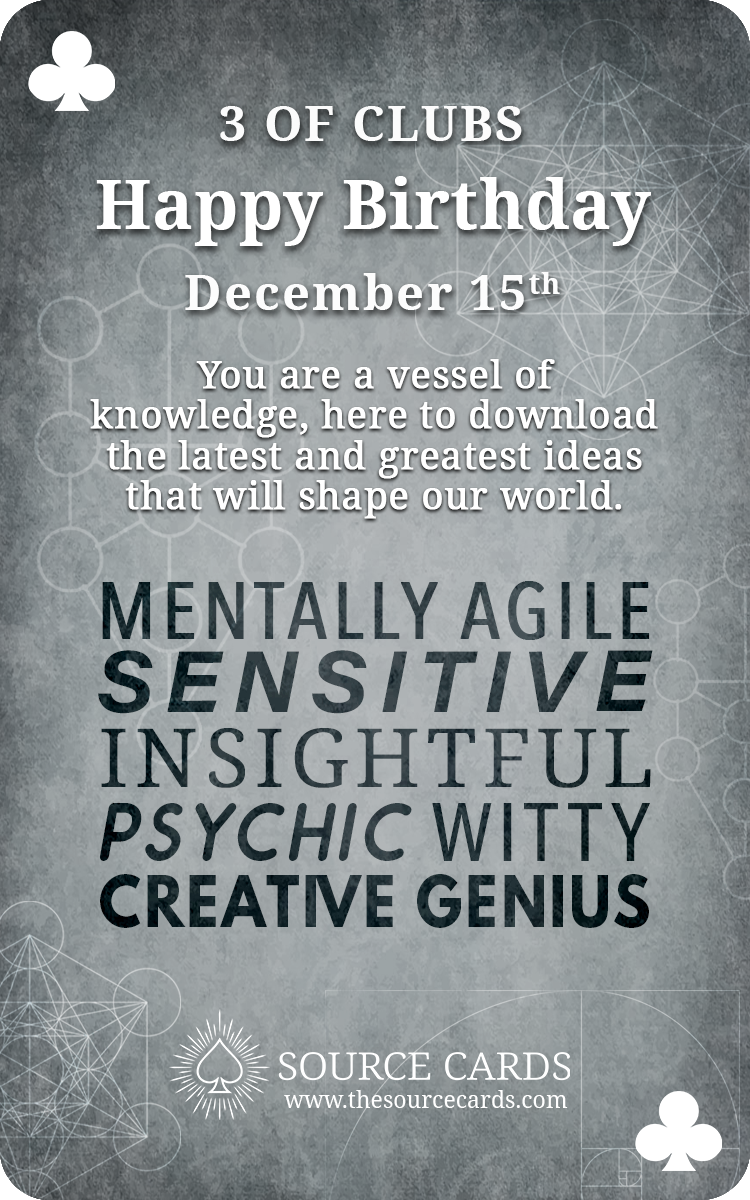 All of these people share your cards to play. Like you, they were born to play the 3 of Clubs overlaid with a 5 of Diamonds personality.

Emperor of Rome from 54 - 68 CE; his rule is often associated with tyranny and extravagance, and he was known for executing people he perceived as enemies, including his own mother; he notably persecuted the early Christians, sometimes burning them alive, seemingly motivated not by public justice but by personal cruelty; he was popular with the commoners of Rome and presented himself as an actor, poet, and musician, which defiled the dignity and authority of the office of the Emperor in the eyes of the noble class; following a plot to overthrow him, he fled Rome and committed suicide

French civil engineer who built bridges for the French railway system; he also designed the iron structure of the Statue of Liberty among many other projects; but he is best remembered as the engineer who designed and built the world famous landmark the Eiffel Tower in Paris

French physicist who was the first person to discover evidence of radioactivity, for which he won a Nobel Prize; the standard unit of measurement for radioactivity, the becquerel (Bq), is named after him

American industrialist who founded the Getty Oil Company and was, for a time, world's richest private citizen

One of Britain's most accomplished and highly regarded generals during World War II; following D-Day and the invasion at Normandy, his army was the first of the Allied Forces to advance into Germany in March of 1945

Brazilian environmental and social activist who campaigned to stop the slashing and burning of the Amazon rainforest; he received many death threats and was eventually assassinated by a prominent rancher; his death sparked outrage in Brazil and led to the creation of the Chico Mendes rainforest preserve covering 1m hectares of forest, the first of many such reserves in Brazil

New Zealand historian who wrote or edited over 30 books on New Zealand topics, including the popular Penguin History of New Zealand