The Jack of Hearts is the primary pattern of your life. It is like your Avatar. It's your entrance token to the game of your life.

The Jack of Hearts is also the secondary pattern of your life. It reflects your outward personality and may rule your behavior. 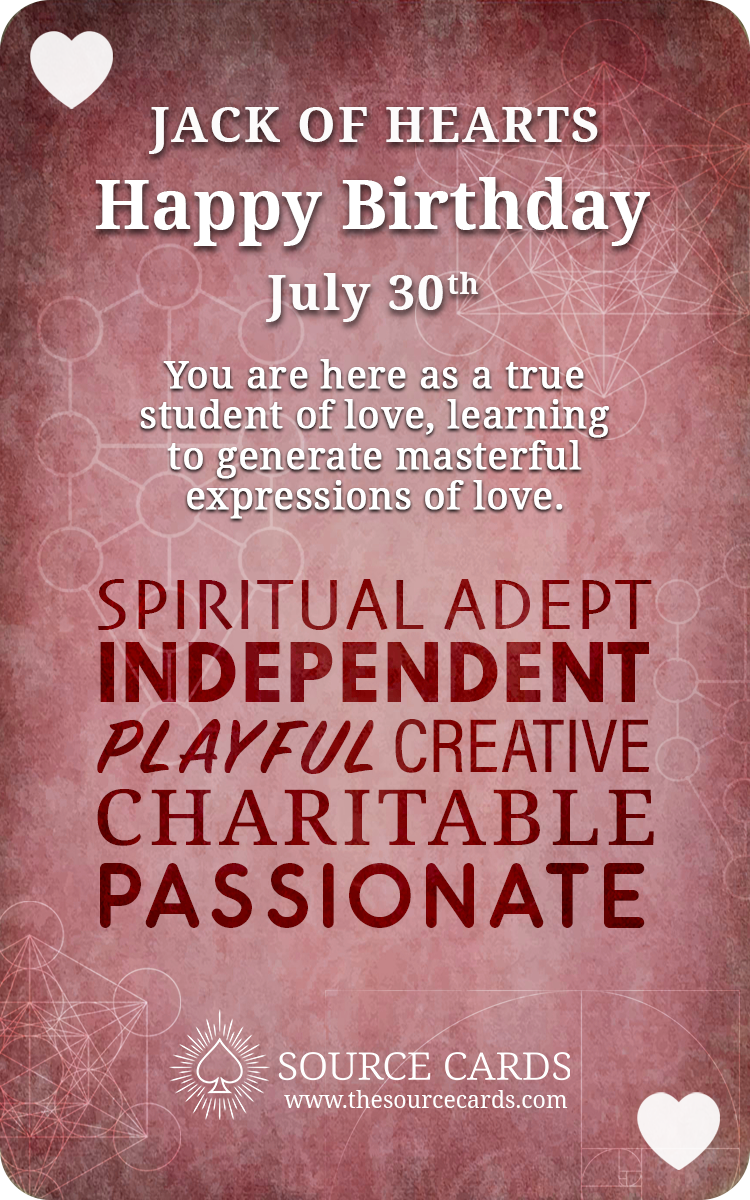 Author of Wuthering Heights a classic of English literature; the only novel she ever wrote, she published it under the pen name Ellis Bell; known for her solitary and reclusive social nature, yet her warm love for nature and animals; one of her teachers commented about her that "she should have been a man... with her powerful reason and head for logic;" her biographer wrote: "She was painfully shy, but physically she was brave to a surprising degree. She loved few persons, but those few with a passion of self-sacrificing tenderness and devotion. To other people's failings she was understanding and forgiving, but over herself she kept a continual and most austere watch." She suffered ill-health most of her life; she never married

Industrialist who introduced the Model T Ford automobile in October 1908, the world's first mass produced car; in producing an automobile for the middle classes instead of just for the wealthy, he changed American society forever; also remembered for establishing a minimum wage in 1914, which doubled the daily rate for most workers; it was a sensational move at the time aimed at acquiring and retaining the best workforce; in later life he rested on his laurels and when he didn't adapt the Model T to customer needs, he was overtaken by competitors; a man of often conflicting character, he is also remembered for his pacifism during World War I and his promotion of antisemitic views

One of the leading founders of Pakistan, she is often referred to as the 'Mother of Pakistan;' she was a close advisor to her older brother as he became the first Governor-General of Pakistan; after his death, she was heavily censored but eventually mounted a political candidacy of her own, eventually losing the Presidential election in 1965; she is remembered for her civil rights activism in her nation; she never married; she died of a heart attack

Body-builder, actor, and former Governor of California, he has been successful at many ventures in his life; widely regarded as one of the greatest bodybuilders of all time, as well as the sport's most charismatic and famous ambassador, he has written many books and articles on the sport; as an actor, he has become a cultural action-hero icon for his roles in the sci-fi classic "The Terminator" and its sequels; in his younger days, he was known to participate in drug-fueled orgies; as a married man, he fathered a child with their housemaid; he was born with heart disease and in later life, he has undergone multiple heart operations and surgeries

American director known for films that revolve around personal relationships and the passage of time, and sometimes even include the same actors filmed over several years, such as the film "Boyhood;" he is known for his distinct style and method of filmmaking; he is a vegetarian and is opposed to the unethical treatment of animals

American actor best known for his role in the movie series "The Matrix;" known for his spiritual interest and his desire to produce a film version of the book The Alchemist

Award-winning American actress who came to fame for her lead role as a trans man who is outed for not being a biological male; the movie is based on a true story and the producers spent three years searching for the right person to play the lead role and chose Swank because "her personality seemed similar to Teena's"