Because you are born on the date of December 24th, it means you are born to play the 7 of Hearts with a 9 of Spades personality.

The 7 of Hearts is the primary pattern of your life. It is like your Avatar. It's your entrance token to the game of your life.

The 9 of Spades is the secondary pattern of your life. It reflects your outward personality and may rule your behavior. 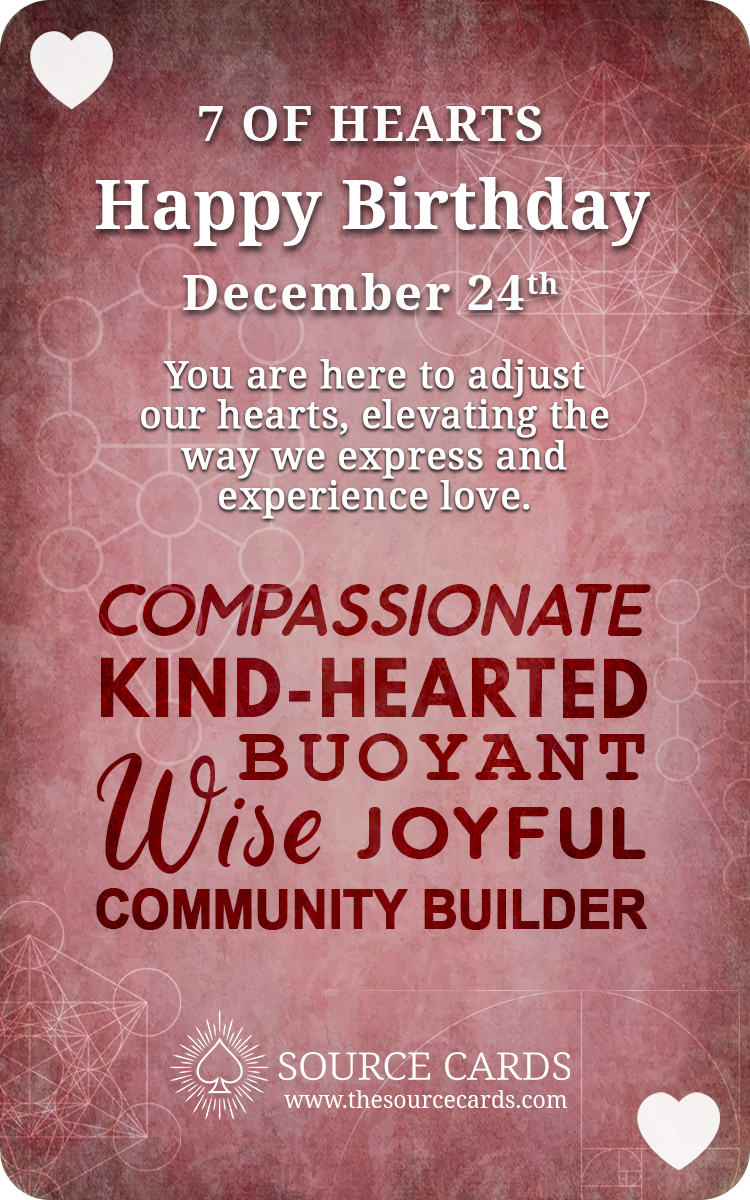 All of these people share your cards to play. Like you, they were born to play the 7 of Hearts overlaid with a 9 of Spades personality.

American frontiersman, wilderness guide, and fur trapper who became a famous celebrity in his own lifetime with exaggerated tales of his exploits being sold in cheap novels; his understated nature and short stature belied the confirmed reports of his fearlessness, combat skills, and tenacity; later, in the American South West, he led several military campaigns to round up the Apache and Navajo and place them on reservations; his tactic was to burn their homes, burn their fields of crops, and kill all their livestock to force them into compliance; he carried out this ruthless plan despite the fact that his first two wives were Native Americans and he had only won the hand of his first wife after dueling another man for the right to marry her

British poet and scholar who, as an Oxford Professor of Poetry in 1857, was the first to lecture in English rather than Latin

American business magnate, Hollywood film tycoon, aviator, record-setting pilot, eccentric recluse, and philanthropist who became famous in his own lifetime and whose life was portrayed in the 2004 film "The Aviator;" he personally set multiple world air speed records and dated just about every Hollywood starlet of the era; but in 1936, while driving at night, he struck and killed a pedestrian; he was cleared of negligence but he was never the same after, with his personal phobias and paranoias becoming all-consuming

Actress who is considered one of the most beautiful women to ever appear on screen; she was known throughout her career for her portrayal of sultry femme fatale characters in film noir roles; she was also known for her high profile love-life and romances with many famous men including Ernest Hemingway with whom she also shared a love of bullfighting

Director of America's National Institute of Allergy and Infectious Diseases (NAIAD) since 1984; he is the recipient of numerous awards including the Presidential Medal of Freedom, presented to him by George W. Bush in 2008; since January 2020, he has been a leading member of the White House Coronavirus Task Force and the country's most recognized and trusted voice during the COVID-19 pandemic

US Senator and Attorney General under President Trump known for his staunch hard-line right-wing policies; he was an early supporter of Trump but his appointment as Attorney General did not last long and he resigned following months of bitter power struggles with President Trump over his decision to recuse himself from the investigation into possible Russian collusion; he then ran for re-election to reclaim his Senate seat for the state of Alabama but lost in a special election to an opponent whom Trump supported against him

American film director, screen writer and producer who has directed and produced such award-winning films as "Precious" and "The Butler;" although he is gay, he considers himself to be "sexually fluid" and he said that he is "sexually attracted to the spirit, the energy, the life force in another person"

"The King of Latin Pop" is one of the best-selling Latin music artists of all time; his 1999 hit song "Livin' La Vida Loca" is generally considered to have launched the Latin pop explosion that brought Spanish-speaking songs into the English-speaking market; after much speculation and living in the closet for his adult life, he eventually came out as a gay man but says he does not like labels and wants to be open to his desire

American author who wrote the vampire romance series Twilight which has sold over a 100 million copies worldwide and been translated into 37 languages; she is a Mormon and her religious faith influences her female characters who remain sexually abstinent until marriage; she has been criticized by feminists for painting women in traditional roles

Click here to live the life that will fulfill your destiny.