Because you are born on the date of January 8th, it means you are born to play the 6 of Spades with a 3 of Hearts personality.

The 6 of Spades is the primary pattern of your life. It is like your Avatar. It's your entrance token to the game of your life.

The 3 of Hearts is the secondary pattern of your life. It reflects your outward personality and may rule your behavior. 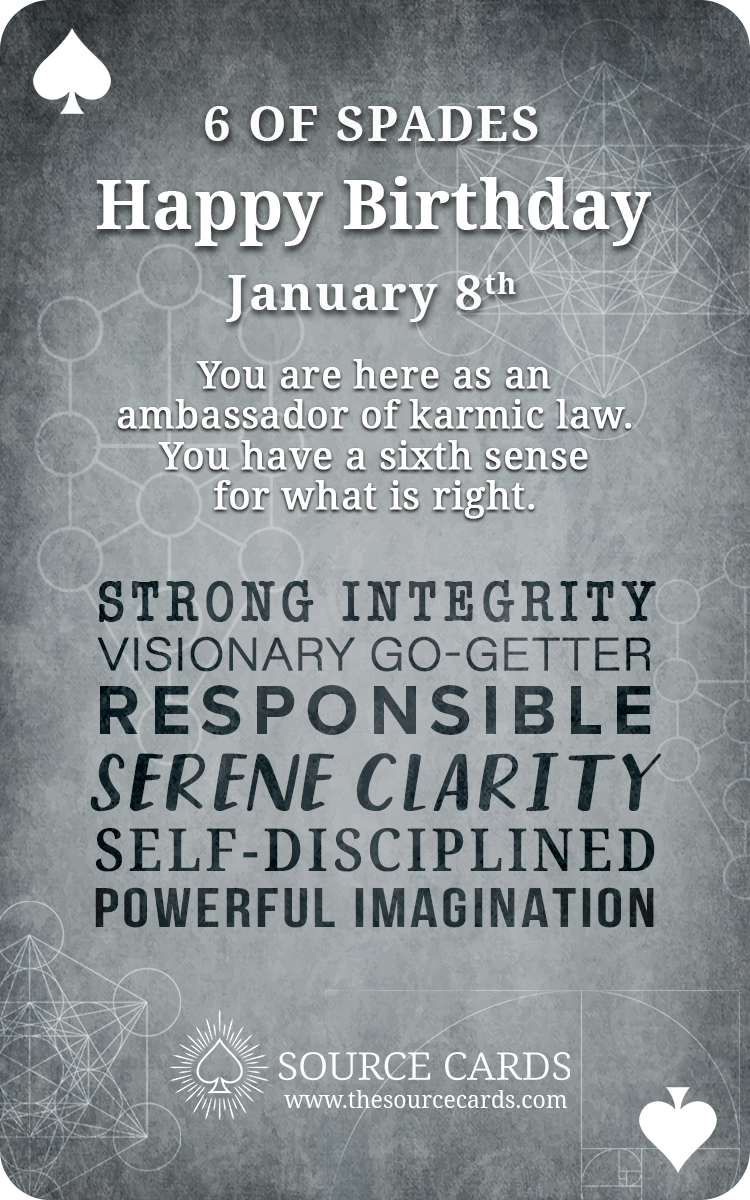 All of these people share your cards to play. Like you, they were born to play the 6 of Spades overlaid with a 3 of Hearts personality.

Lawyer who is credited as the primary author of the Texas Declaration of Independence when the state of Texas wanted to be recognized as an independent republic; when he lost his law practice, he took a bowie knife and committed suicide by cutting open his abdomen

British naturalist who independently arrived at a theory of evolution and whose writings were published jointly with Charles Darwin; his belief in spiritualism and his opposition to mandatory small-pox vaccinations, however, strained his relationships with members of the scientific community; he also struggled financially because of losing money in unsuccessful investments

French cyclist who was the first to win the Tour de France five times in a row; in all, he won it eight times; he was known to be very superstitious; he also famously never hid the fact that he took performance enhancing drugs, saying that "only a fool would imagine it was possible to ride Bordeaux–Paris on just water;" he died when he was 53

American cultural icon who is the best-selling solo music artist of all time; he is known as the "King of Rock n' Roll" or just "The King;" about him and his influence and legacy, John Lennon famously said, "before Elvis, there was nothing;" his sexually provocative performance style (for that era) earned him much controversy and is considered to have permanently changed the face of American popular culture; he was found unconscious on his bathroom floor when he was 42; after years of drug abuse and accidental overdoses, the official cause of death was cardiac arrest

British theoretical physicist known for his discoveries of the properties of Black Holes; he suffered the gradual loss of his physical faculties and was confined to a wheelchair and later could not even speak; he achieved commercial success with several books in which he discussed his theories and cosmology in general; his book A Brief History of Time appeared on British bestseller lists for a record-breaking 237 weeks

British pop star who was one of the most influential and best-selling musicians of the 20th century; he was a pioneer of the glam rock era with his flamboyant and androgynous alter ego Ziggy Stardust; he publicly declared himself to be gay at the age of 25 and then recanted eleven years later, saying that his interest in homosexual culture was more a product of the times than a reflection of his real desire; he also said that it was the biggest mistake he ever made to make that public declaration, saying it prevented people from seeing his music and his artistry; in a British poll in the year 2000, he was voted the "most influential artist of all time"

American singer, songwriter, record producer and convicted sex offender; he has been credited with helping to redefine R&B, earning nicknames such as "the King of R&B" and the "Pied Piper of R&B;" he was repeatedly accused of sexual abuse, often with underage girls; he faced multiple civil suits and was charged by multiple criminal courts; he repeatedly denied the charges until a federal jury found him guilty on 9 counts including racketeering, sexual exploitation of a child, kidnapping, bribery, and sex trafficking; in a subsequent trial he was also convicted of 3 counts of child pornography and 3 charges of enticing a minor; he was sentenced to 30 years in prison

Supreme leader of North Korea since 2011; he has expanded North Korea's nuclear program which has aggravated tensions with the United States; he rules North Korea as a totalitarian dictatorship following the same cult of personality as his father and grandfather before him