Because you are born on the date of December 8th, it means you are born to play the 10 of Clubs with an Ace of Clubs personality.

The Ace of Clubs is the secondary pattern of your life. It reflects your outward personality and may rule your behavior. 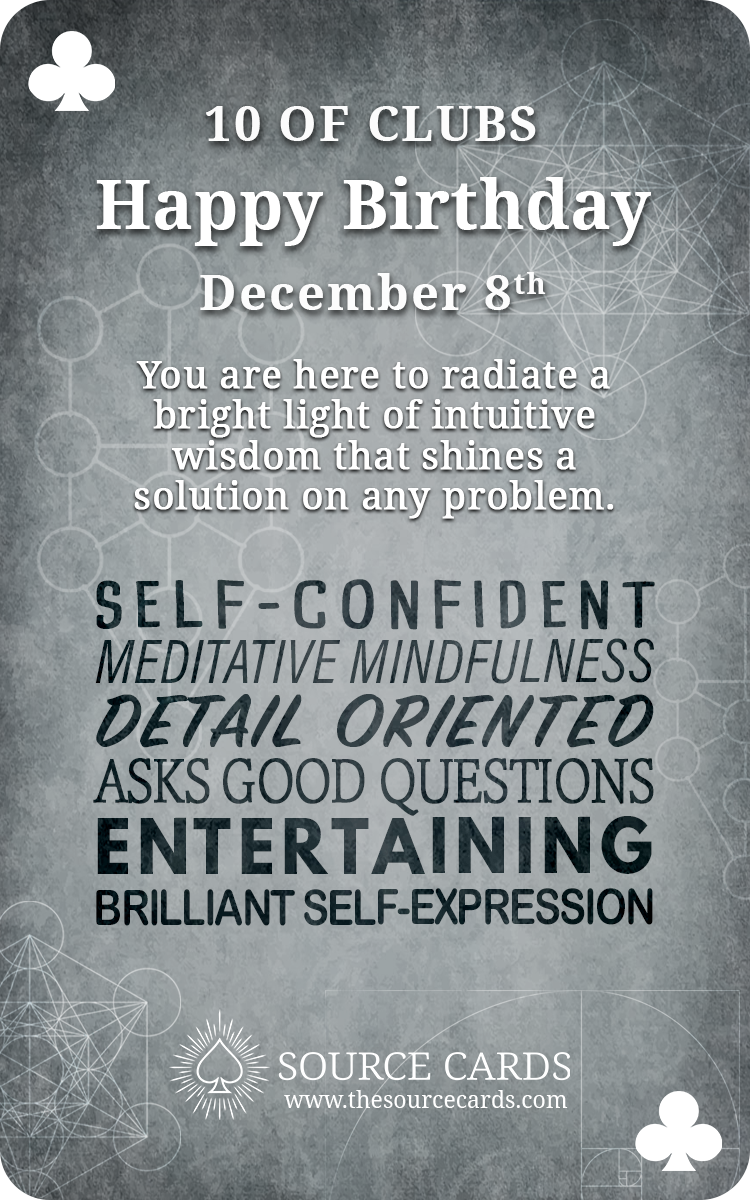 All of these people share your cards to play. Like you, they were born to play the 10 of Clubs overlaid with an Ace of Clubs personality.

Leading Roman lyric poet during the time of Emperor Augustus whose poetry has left a lasting and indelible imprint on Western literature; described by critics saying that: "He can be lofty sometimes, yet he is also full of charm and grace, versatile in his figures, and felicitously daring in his choice of words."

Became Queen of Scotland in 1542 when she was only 6 days old upon the death of her father King James V; she was promptly taken to France where she later married Francis II who became King of France, making her thus Queen of two countries; following Francis' death, she returned to Scotland to rule as a Catholic monarch in a Protestant nation; 6 years later, she was forced to abdicate the throne, kept under house arrest, and eventually executed by her cousin Queen Elizabeth of England

American inventor whose cotton gin invention revolutionized the way cotton could be harvested, which made cotton into a cash crop and unintentionally cemented the economic foundation of slavery in the United States; despite owning a patent for his invention, he lost all profits from his invention fighting lawsuits over patent infringement

Leading painter in the Mexican "Muralist Movement" who was a leading member of the Communist party in Mexico until his expulsion; he traveled to Russia to meet with Communist leaders; he was also famously married to fellow Mexican artist Frida Kahlo and their relationship was known to be extremely tempestuous

American singer, dancer, and actor once called "the greatest entertainer to ever grace a stage;" he was famously part of Hollywood's Rat Pack; he lost an eye in an automobile accident and wore a glass eye for the rest of his life; he also converted to Judaism when he was 36 years old; later in life, he famously quipped that he was a "one-eyed Negro who's Jewish."

American lead-singer for the rock-bank "The Doors;" due to his wild personality, drug use, poetic lyrics, widely recognized voice, unpredictable and erratic performances, and the dramatic circumstances surrounding his life and early death, he is regarded by music critics and fans as one of the most iconic and influential frontmen in rock history; he died at age 27, found in the bathtub, with the official cause of death listed as heart failure

Founder of Giordano, an Asian clothing retailer and Next Digital, the largest Hong Kong listed media company; among his publications is the popular newspaper Apple Daily known for its support of pro-democracy groups in Hong Kong

American stand-up comedian; he was a former Pentecostal preacher who performed stand-up routines that were characterized by an intense style, similar to charismatic preachers, punctuated by his distinctive scream

American actress and sex symbol; she is known to be estranged from her family, especially her mother; she is a vegetarian and animal rights activist; she has spoken publicly about her struggles with panic disorder, agoraphobia, and social anxiety, appearing in the HBO film, "Panic: A Film About Coping"

Irish singer-songwriter who rose to fame in the 1980s; she has produced 10 solo albums in her career; in 2018, she converted to Islam and changed her name; no stranger to controversy, she famously tore up a picture of the Pope on Saturday Night Live proclaiming that it was time to fight the real evil --this was years before the Church officially acknowledged the rampant pedophilia and sexual abuse among priests; she suffers from bi-polar disorder and has appeared on talk shows to "destigmatize" mental health issues

Trinidadian-American rapper, singer, songwriter, actress who already in her career has sold over 100 million records worldwide; she is known for her colorful costumes and wigs and for adopting alter-ego personalities, who have their own names, accents, and roles in her performances