Because you are born on the date of December 10th, it means you are born to play the 8 of Clubs with a 10 of Diamonds personality.

The 8 of Clubs is the primary pattern of your life. It is like your Avatar. It's your entrance token to the game of your life.

The 10 of Diamonds is the secondary pattern of your life. It reflects your outward personality and may rule your behavior. 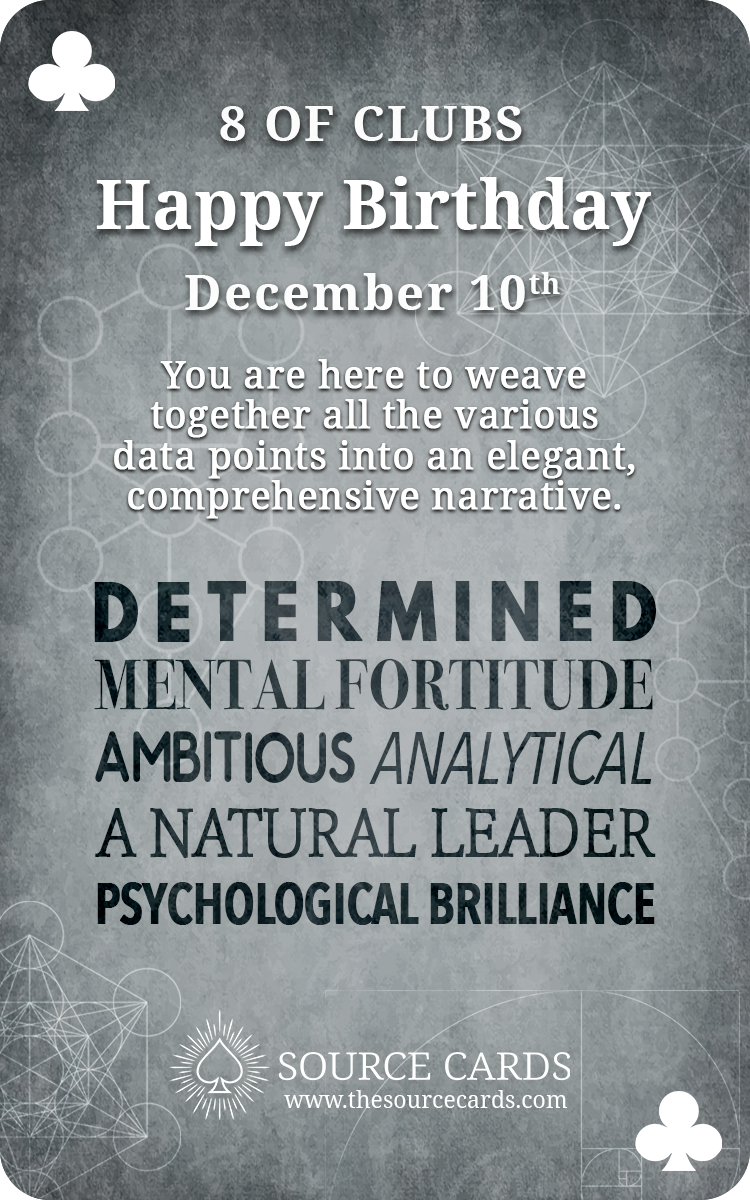 All of these people share your cards to play. Like you, they were born to play the 8 of Clubs overlaid with a 10 of Diamonds personality.

Publisher and editor of the abolitionist newspaper "The Liberator" and one of the founders of the American Anti-Slavery Society; he was considered by many to be the strongest voice in America; despite living in Boston, he had a price on his head and his life was sometimes at risk; at one point he had to be smuggled to England to keep him safe; he also became a prominent voice for the women's suffrage movement

British mathematician and computer programmer who in 1837 wrote content for the Analytical Engine, the world's first general purpose computing machine; she is considered by many to be the first person to recognize the full potential of computers; she is also regarded as the world's first computer programmer; she married the Earl of Lovelace, which made her the Countess of Lovelace; as a child she was known to pursue her studies with devotion; and as a woman, long before it was common for women to be taken seriously as intellectuals, she was recognized for her mathematical talent which is what led her to do work on the Analytical Engine

American poet who is now regarded as one of the most important figures in American poetry; her unconventional use of punctuation and meter was too alienating for the publishers of her time and only 10 of her 1,800 poems were published during her lifetime; she lived a life of total seclusion on a farm

Indian politician, independence activist, writer, and statesman; in 1948, he became the first Indian-born governor-general, a position which was soon abolished when India officially became a Republic; as a writer, he made lasting contributions to the canon of Indian literature; Gandhi said of him that he was "the keeper of my conscience"

German-Swedish poet who won the Nobel Prize for literature in 1966; she was a voice for Jewish heritage and loss after WWII

Indian guru who became the leader of the Divine Light Mission at age 8 years old when his father, the founder and guru, passed away; he continues to travel and teach; he has been criticized for his opulent lifestyle

Sir Kenneth Charles Branagh is a British actor and filmmaker. He has been nominated for five Academy Awards and five Golden Globe Awards. He has won three BAFTAs and two Emmy Awards. He was appointed a Knight Bachelor in the 2012 Birthday Honours and knighted on November 9, 2012