Because you are born on the date of August 30th, it means you are born to play the 9 of Hearts with a 7 of Clubs personality.

The 9 of Hearts is the primary pattern of your life. It is like your Avatar. It's your entrance token to the game of your life.

The 7 of Clubs is the secondary pattern of your life. It reflects your outward personality and may rule your behavior. 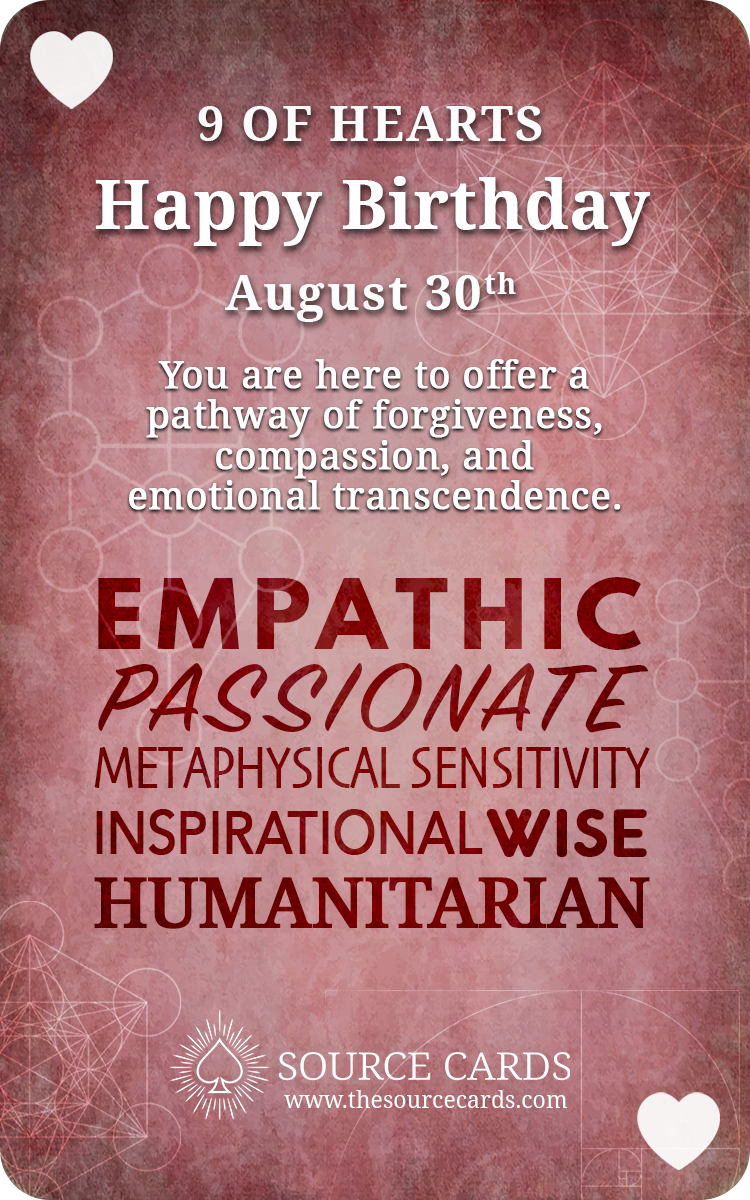 All of these people share your cards to play. Like you, they were born to play the 9 of Hearts overlaid with a 7 of Clubs personality.

King of Spain who assumed the throne when he was 15; he was the last ruler from the House of Ivrea; he is often depicted on his knees in prayer; the first historian to chronicle his life was a statesman who served Peter's usurper and enemy -- he gave him the moniker "the Cruel;" later historians and popular culture, however, began to refer to him instead as "Peter the Just" and he is remembered fondly by British poets and writers including Geoffrey Chaucer

Author of many books including the iconic Frankenstein; her mother died just one month after giving birth to her; at age 17 she started an affair with the famous poet Percy Bysshe Shelley who was married at the time; together they fled England and upon their return, faced social ostracism until his wife committed suicide and they could marry; three of her four children died in childbirth, only her last survived; when she was 25, her husband drowned at sea; she devoted the rest of her life to ensuring the publication of her husband's works

New Zealand-born physicist and chemist who became known as the 'Father of Nuclear Physics;' he discovered the concept of radioactive half-life for which he won the Nobel Prize in 1908; he performed the first artificially induced nuclear reaction in 1917 and in 1932 the first experiment to split the nucleus in a fully controlled manner was performed by students working under his direction; the chemical element Rutherfordium (element 104) was named after him in 1997

Baseball legend who was nicknamed 'The Kid' and who is widely considered to be one of the game's greatest; he has the highest lifetime batting average of any player in the modern era and the highest on base percentage; despite being a celebrated hero of the game, however, he was on uncomfortable terms with the media during his career, and made up his mind that the "knights of the keyboard," as he derisively labeled the press, were against him; he was known to be aloof, temperamental, high-strung, and at times, tactless

Investor who is the most successful investor of the modern era and who in 2008 was the richest man in the world, but after giving away billions to charity, he lost the top spot; he famously initiated "The Giving Pledge" pledging to give away 99% of his wealth and inviting other billionaires to join in his pledge; despite his vast fortune, he continues to lives in the same small house in Omaha, Nebraska that he bought in 1958; he is sometimes referred to in investing circles as "The Oracle of Omaha;" he is an avid bridge player and plays 12 hours a week

American actress who, at one time, was Hollywood's highest paid actress over the age of 40; she has also written two books on health and has now shifted her attention to owning a vineyard and producing wine